We all have been fascinated by the athletic form of Cristiano Ronaldo.

But he also doesn’t disappoint with his fashion taste and the famous CR7 haircut.

Some of the Cristiano Ronaldo hairstyles have been huge hits, while others have been complete flops over the years.

So, without further ado, let’s get styling!

From short and spiky to lengthy and wavy, the soccer star Ronaldo has tried them all.

It doesn’t matter whether you are looking for a new style to try or just want to see what CR7 has rocked in the past, you won’t want to be out of style and miss the latest Cristiano Ronaldo haircuts!

The most recent Cristiano Ronaldo hair cut is an elegant high fade hairstyle with a messy top.

Ronaldo looks excellent with a piece of his hair falling down his face, reminiscent of Johnny Depp’s 90s look. 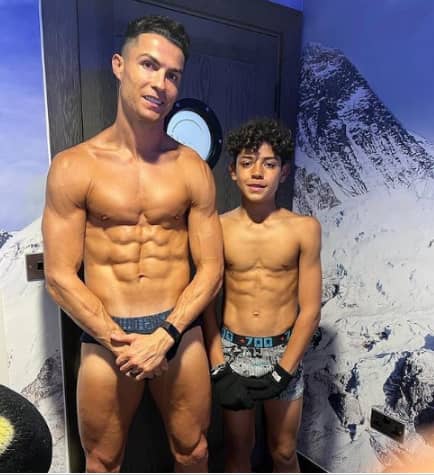 This CR7 haircut, with short layered hair on the sides and perfectly styled long hair, demonstrates that Ronaldo can look good in any hairstyle.

The contrast between the different layers and the flawlessly applied gel products adds shine to his hair.

The Crew cut is a timeless style that is ideal for keeping hair neat and avoiding unruly strands. The hairstyle is an excellent choice for any occasion.

Ronaldo’s Crew cut haircut is for those who want a simple yet refined look. 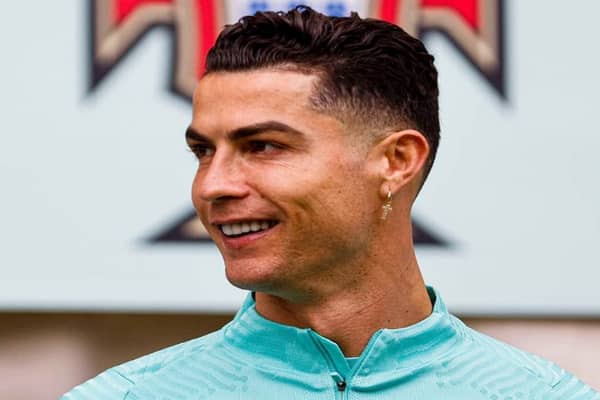 The slicked-back hair with a wavy top is another classy look in the collection of Cristiano Ronaldo haircuts.

The top hairstyle with the skilfully slicked hair emphasises his facial features.

The layered to almost shaved sides and back are perfect for the summer.

As for the top, you can quickly style it by running your fingers through it, putting on a bit of gel and letting the summer breeze do the rest.

The most significant advantage of the fade haircut Ronaldo often wears is that it is easy to maintain.

Ronaldo has worn the short hair buzz cut hairstyle several times, and to be honest, he looks pretty good in it.

Cristiano Ronaldo’s short hair not only complements his face shape but also allows him to display his chiselled features.

Undercut With a Spiked Comb Over

A sleek, spiked comb-over has replaced Ronaldo’s once-voluminous hair with an undercut. This is a departure from his usual style, but it appears to be working for him.

The sides of his head are shaved close to the skin, while the top is styled into a series of densely packed spikes. The result is a sharp, edgy look that will turn heads.

The spiky hairstyle with longer cut sides and trimmed sideburns is another pointy hairstyle that suits Ronaldo. And with the glasses, he looks very fashionable. 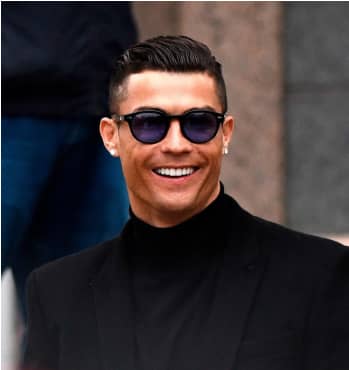 Cristiano Ronaldo hairstyles include a variety of fade haircut variations. One of them is Ronaldo’s mid-fade haircut, which gives him a more subtle appearance.

Meanwhile, he maintains a confident demeanour that makes him appear to be a true gentleman.

Comb Over the Undercut

The all-time Euro goalscorer rocks the combing styles, one of which is the comb over the undercut. With smoothly combed hair on the side, this is one of the Cristiano Ronaldo hairstyles worth trying out.

Before getting to his latest hairstyles, the highest-paid soccer player went through quite a few distinct looks.

And while some of his older hairstyles may not be everyone’s cup of tea, there’s no doubt that they helped him stand out from the crowd.

A Combination of a Comb-Over, Undercut and a Hard Part

His comb-over, undercut, and the hard part combination is one of his signature look. This combination produces a stylish and masculine, clean, polished look. His hairstyle is stunning, thanks to the shaved line.

It’s no surprise that this look is so popular among men of all ages.

Texture Comb Over with Tapered Sides

One of the best striker’s beauty secrets is his texture comb-over hairstyle with tapered sides. It’s both modern and classic, and it highlights his attractive features.

The best part is that it’s simple to style, so you can pull off the look even if you’re not a professional hairstylist. Trust me, you’ll be turning heads everywhere you go.

This haircut may seem like a flop now, but it was a massive hit in the late 90s and early 2000s. His blond streaks help to add definition and depth to curls while also brightening up the overall style.

On the other hand, many fans didn’t like his hairstyle and teased him by calling his new look “noddle hair.”

Something similar to a pompadour style, Cristiano Ronaldo curly hair in the Serie A Championship in 2019/20 was a huge hit.

Cristiano Ronaldo long hair is not usually what we see today, but Ronaldo enjoyed revealing his curls back in the day.

Could you believe that one of the best free-kick takers of all time had a mullet? Whether you love it or hate it, there’s no denying that Ronaldo’s mullet was one of the most talked-about hairstyles in football. He wore it with a soft spiky top and longer at the back.

CR7 also liked mullet-like hairstyles and incorporated them into many of his looks.

He even has his own mullet, called the Metro Mullet.

The man bun was a welcome change from Ronaldo’s usual clean-cut appearance.

Speaking of clean looks, Ronaldo has also had several short buzz cuts. But, we must be honest: he is pulling off this look.

The Cristiano Ronaldo top knot haircut is popular for men who want to look cool.

This hairstyle is distinguished by a long, slicked-back top knot that is frequently paired with a well-groomed beard. The top knot’s length can vary depending on preference, but it is usually longer than the head’s hair on the sides and back.

The pompadour style with stylish lines sure suits Ronaldo. The combination of short faded sides and a top wave makes it perfect for formal and informal occasions.

Cristiano Ronaldo hairstyles have included many shaved lines in various forms. One of them is the mohawk style with side design lines.

Ronaldo has experimented with a variety of hairstyles, including spikes, highlights, shaved lines, and even a mohawk.

Eventually, he settled on a more traditional look but still changes his style from time to time. Whether wearing short or long hair, Ronaldo always looks sharp.

Would you dare to try one of Cristiano Ronaldo hairstyles the next time you go to your barber?

What is Ronaldo hairstyle called?

Although Cristiano Ronaldo has tried out different hairstyles throughout the years, his current and most used haircut nowadays is the faded hairstyle.

Does Ronaldo have natural curls?

Does Ronaldo have hair implants?

Ronaldo’s hair is all-natural, and has had no hair transplants yet.

However, he has stated that if he ever needs the procedure, he will not hesitate and get hair implants.

When did Ronaldo have noodle hair?

Ronaldo has included the noodle hair in his Cristiano Ronaldo hairstyles multiple times. He first appeared with noodle hair when he started playing for Manchester United.

He also had curly hair with blond highlights when he was part of Real Madrid and Juventus.